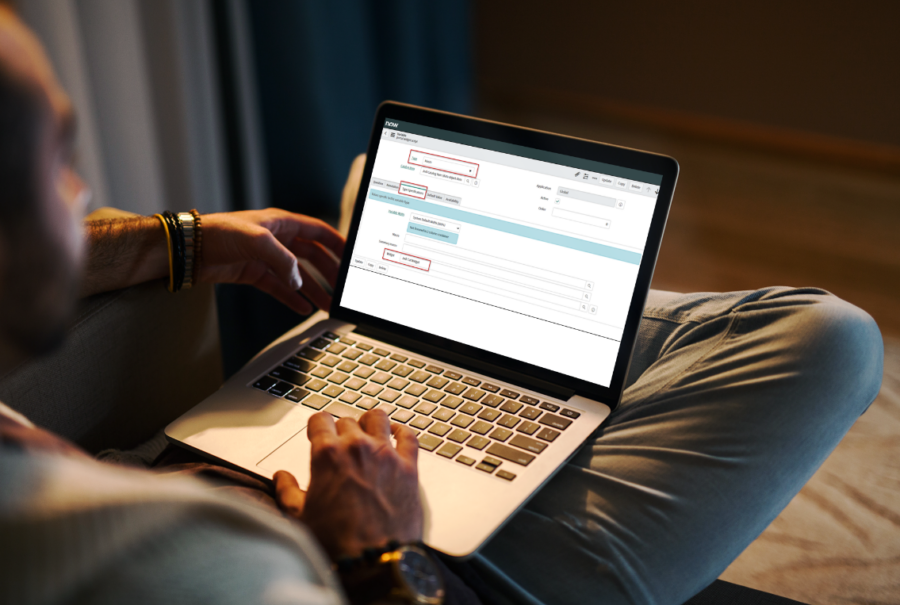 If you’re a ServiceNow portal developer, chances are you’re fully aware of the portal widget ‘data’ object and all it has to offer. You may be surprised that portal widgets aren’t just for portal pages. In fact, portal widgets fit nicely into service catalog items.

Here’s a look at two new methods (along with the ServiceNow code for both) you can use to access server data in your portal-based service catalogs.

The widget is displayed in the second screenshot. Notice there’s a UI consisting of HTML (and Angular). Leveraging portal widgets is a great way to develop robust offerings that go beyond basic catalog design patterns. In this example, we have an input that allows the user to type anything they wish and display it on the very first form variable (Populated onClick from form buttons).

The user also has the ability to select from the ‘Populate w/User Data’ drop-down and populate this variable with the current user’s email, title, or username. Finally, the user can mouse over and select any role to populate the form variable with that role’s title. 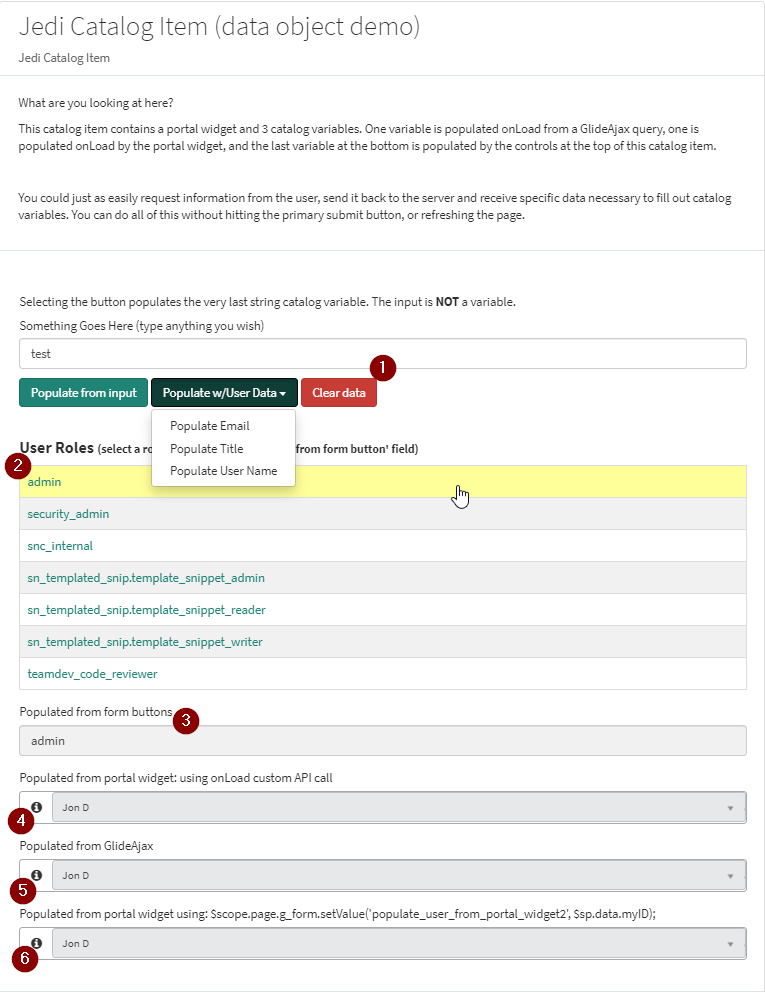 Now, let’s look at other options for client scripting and server scripting.

While this method is used to perform something mundane in this example, it can be used to initiate a complex data push or pull. Additionally, you can perform conditional DOM manipulations with this method. This example has been understated to illustrate the concept.

Example #2:  Populated from GlideAjax (this is provided for comparison purposes only)

This is your standard GlideAjax call being shown for comparison. Please see ServiceNow’s documentation if you would like to learn more about GlideAjax. You can leverage this method to return one or multiple values through an asynchronous callback function. Please note: You must have an independent client-callable script include to accompany this.

This code is used in the widget’s Client Controller only. No other code is necessary anywhere

Example #1 and Example #3: Both are using a variation that calls the same data from the same script include. What you’re missing in this formula is the widget code. Here’s the script include: 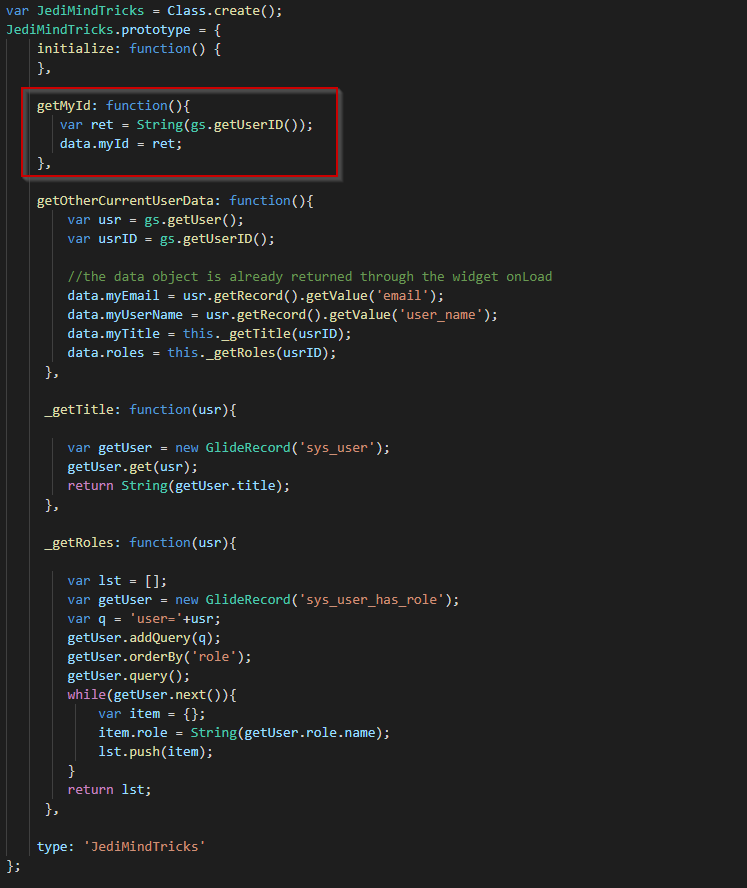 Notice the function does not include a ‘return.’ The ‘data’ object is exposed when the widget loads.

Example #2:  GlideAjax prototype (this is provided for comparison purposes only)

So as not to downplay GlideAjax, you can absolutely create and return JSON objects and reach out to non-callable functions.

Portal Widget (Examples #1 and #3 will use this)

Keep in mind that the ‘data’ object is exposed to the widget on page load through the server script of the widget (scope). The widget server script is the first portion of the widget to load. Essentially, an API can be developed through a widget that can be used for multiple catalog items by simply including it in the Macro.

In Example #1, we made a call to a function from a catalog onLoad client script

Notice that this function’s ‘userSysID’ method is returning an Angular object that is calling one of the widget’s client controller functions (c.userSysID()).  This can be a more difficult way of performing the particular action since the ‘data’ object is already exposed. This is included to demonstrate a method to actuate widget functions from a catalog client script.

For Example #3, there is no catalog client script, this is all you need from the widget client controller

The ‘data’ object is being populated from the script include through the widget’s server script. This last step exposes all the data within any script include function. This applies to both Example #1 and #3. 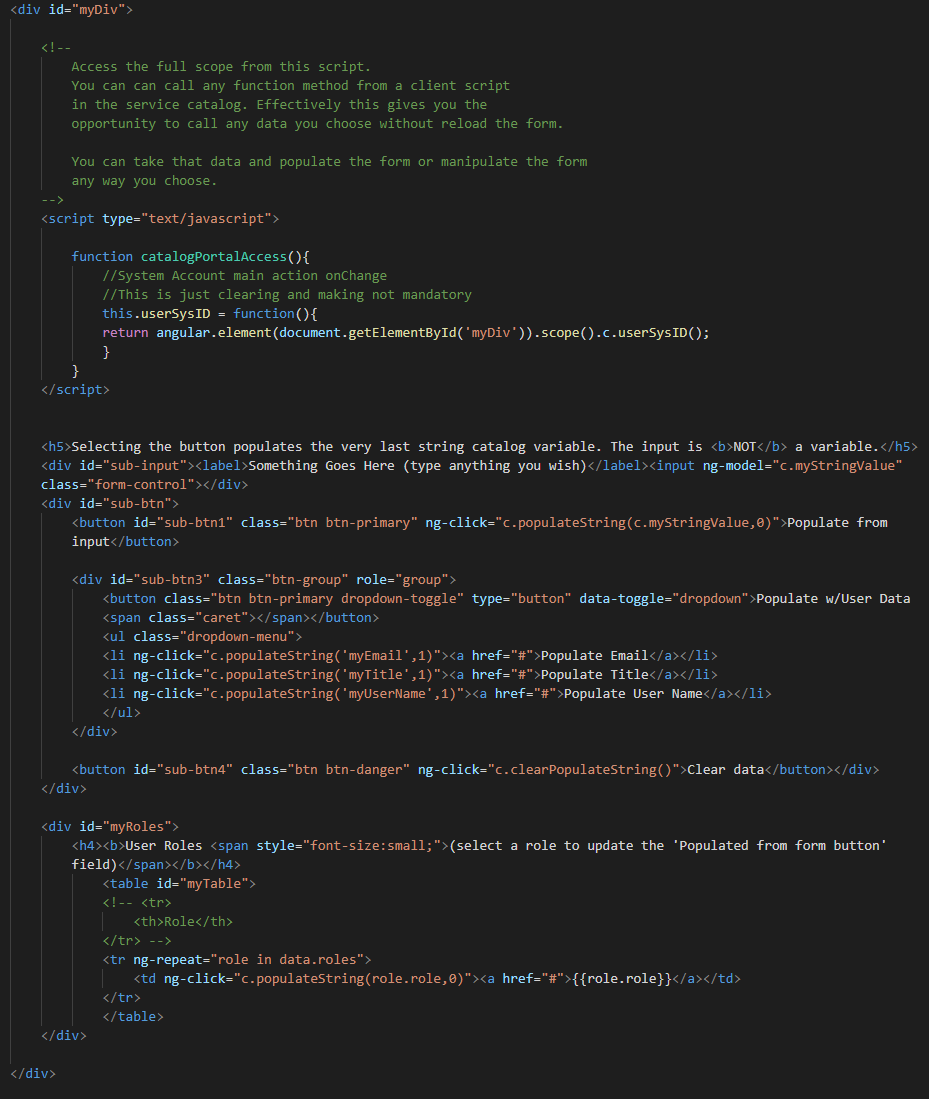 Create the code below 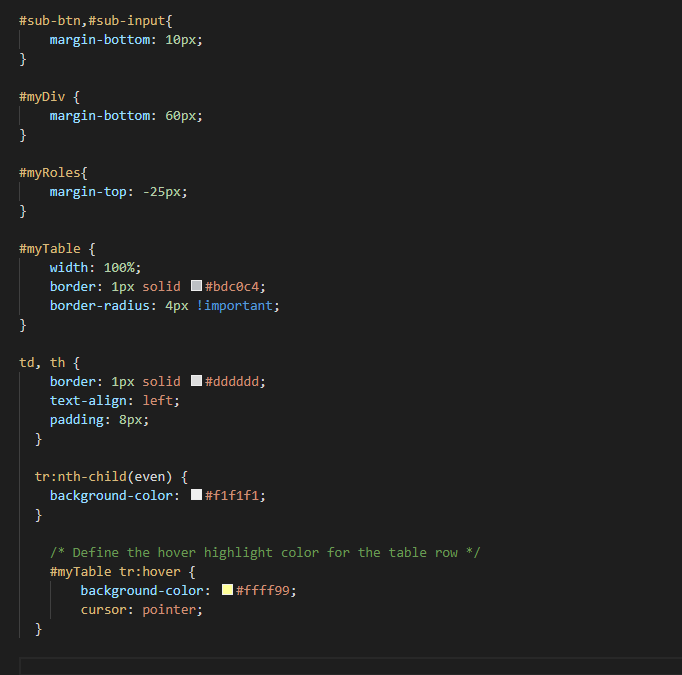 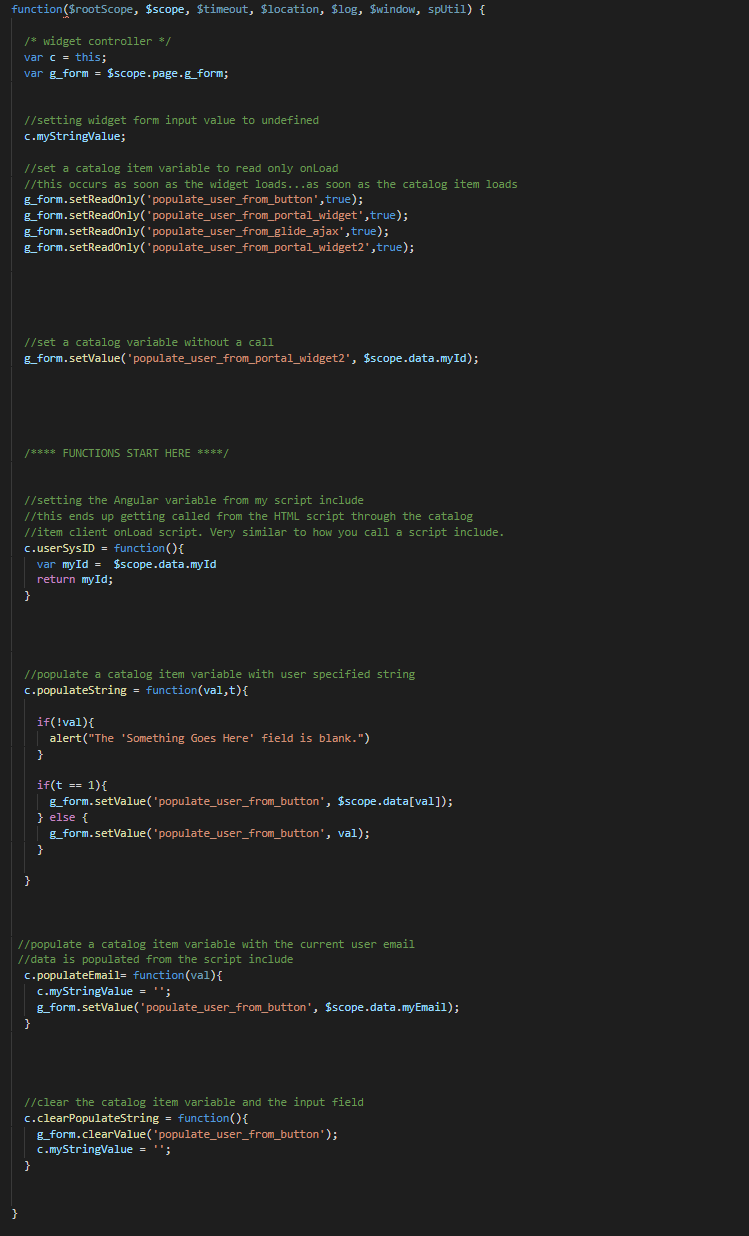 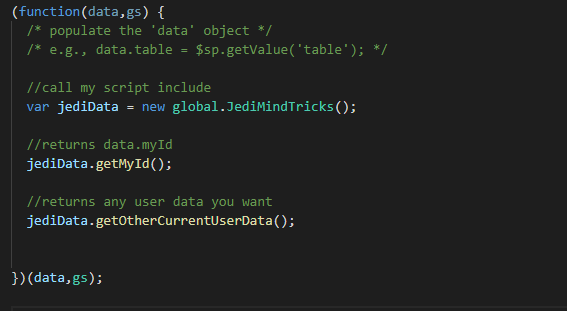 →Pro Tip: If you’ve ever found yourself needing to perform a particular g_form action 20 or more times in a single script, you could easily create a function call and pass a comma-delimited string parameter of variable names to the widget client script. At the client script, you can iterate through the list and automatically generate virtual g_form calls for each catalog variable you listed. Here’s an example of a script that is performing 3 g_form functions on as many catalog variable names placed in the ‘list’ parameter. In the catalog, this would be a three line call for about five variables instead of 15 lines:

It is important to understand that this method is simply using standard JavaScript, Angular, and Glide scripting to maximize ServiceNow’s platform capabilities.

*Author’s note: Code provided in this article was written in a manner to provide configuration options and do not always reflect my personal choice of techniques. For example, in the ‘_getRoles’ function, I purposely provided an extended code version to demonstrate how extensive you can be when populating the data object.

Please fill out this form and a member of our team will reach out to connect. We look forward to speaking with you!